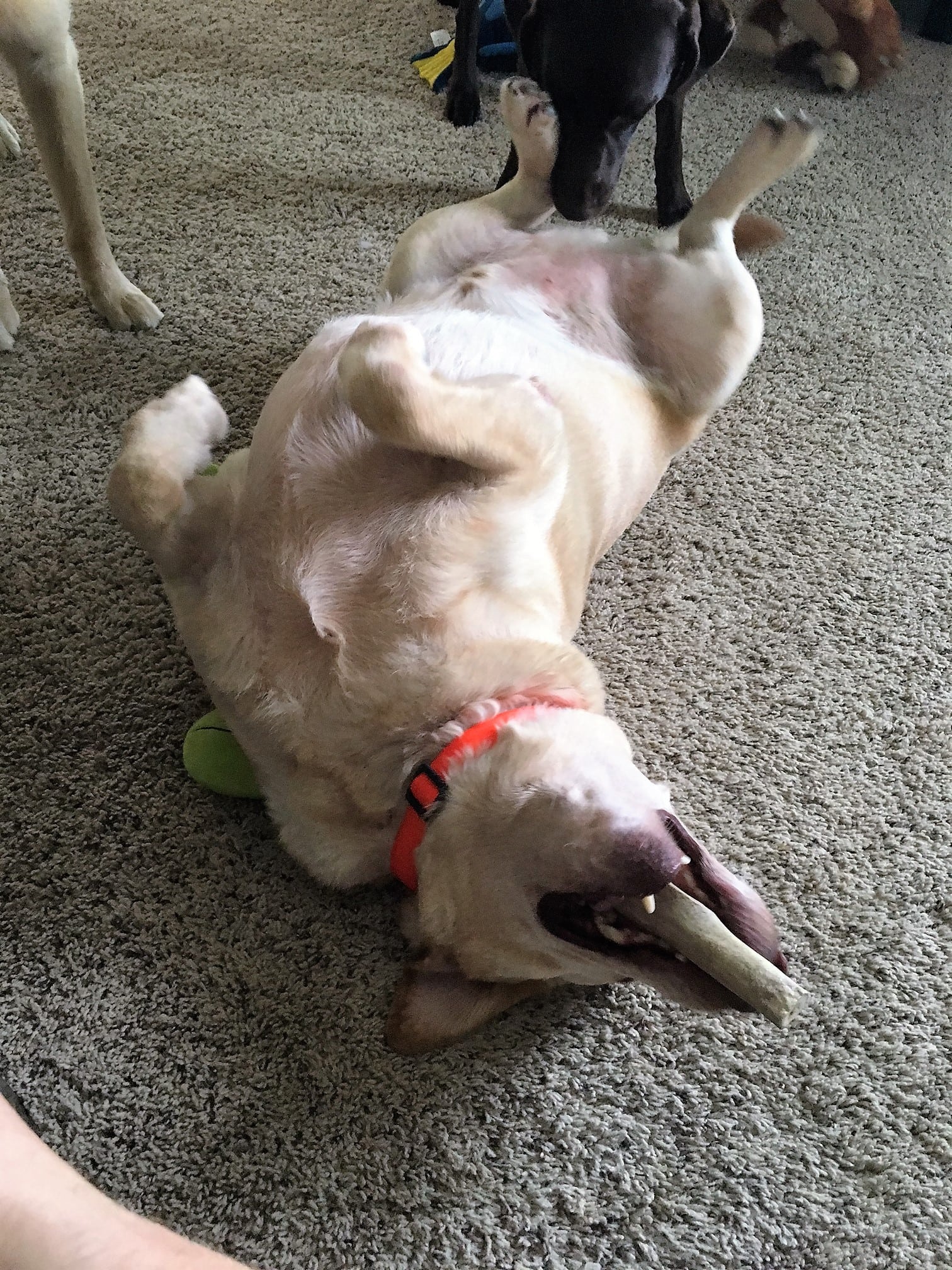 How to Handle & Interpret a Growling Dog

Recently I was awakened from a deep sleep by someone poking me. I complained and whined. It didn’t work to stop the annoyance. Finally I blurted out “whaaaat?” in an angry tone of voice.

My poor husband was the one doing the poking and he was trying to wake me up so I wouldn’t be late for my first appointment of the day. Of course, after gaining complete consciousness I felt awful that I spoke and reacted to him in such a fashion. He now calls me the crypt monster.

That same weekend while a friend was visiting me I attempted to move my Lucy — a Foxhound — on the couch because she looked like she was going to fall off. I pushed and prodded with all good intentions to keep her comfortable as she lay in a semi-sleep state. After trying to push around her 107 lbs of her body she looked at me and began growling, snarling and whining. Her tone of voice sounded as if she were saying “hey, what the heck do you think you’re doing? I’m sleeping. Stop it!”

I assured her and apologized and told her she was a good girl. My friend looked at me aghast and asked why in the world I didn’t reprimand her for her naughty behavior. My answer was that she was being very polite by growling. This served only to confuse my friend further. I explained that dogs have so few ways to express themselves to us when they are upset. Growling happens to be one of them.

Growling is quite possibly one of the most misunderstood expressions in dogs. The behavior isn’t evil and it doesn’t always mean a dog is unfriendly. Growling may occur when a dog is in pain, frightened, annoyed, to send a warning, or tell you that pushing and prodding them while they’re trying to sleep is really annoying.

As humans we have an unlimited amount of ways to express ourselves when agitated. Dogs are fairly limited to barking, whining, snapping, running away, and yes, growling. To put growling into perspective lets examine some of the ways in which humans respond to things that tick them off.

We yell at people, scream at drivers on the road, flip them the bird, break things, slam doors, stomp our feet, huff and puff, make idle threats. If you begin adding in domestic violence, gang violence, missile launches, genocide and arson, the growl of a dog doesn’t seem all that bad of an expression.

Despite the vocal and oftentimes violent ways in which we express our feelings we’re quick to point the finger at a growling dog and label it dangerous or a bad dog.

Now, I’m not giving a free pass to a growling dog. Threatening postures from a dog should never be taken lightly and one should seek professional help if this is a common occurrence.

Growling is a warning. It is a dog’s way of saying this is making me very uncomfortable.  If you continue to do what you’re doing I will have to take action. In dogspeak the behavior is considered to be quite polite. The reason I say this is because a dog can easily cause much damage by biting us. Those that growl are trying to avoid conflict, or at the very least, attempting to prevent a situation from escalating.

When a dog is growling the best way to handle it is to stop whatever you’re doing that’s causing the dog to feel uncomfortable. Yelling at it, threatening it with punishment, or actually getting physical with it may increase the likelihood that the next time you might get bitten. This is because growling did not work to stop the threat. In the best situations we would like the dog never to growl, but perhaps walk away instead. This certainly can be achieved in training, but in order for any training program to be successful we must understand what the dog is uncomfortable with and begin eliminating those factors that elicit growling.

My backing down, walking away, or using a soothing tone of voice, we are helping to ease the dog’s tensions. Also begin thinking of how you could do things differently that wouldn’t cause the dog to get so uncomfortable that his has to resort to growling. For example, f you want to move a sleeping dog, perhaps it’s best to call their name so they can come toward you for a treat. For a dog who growls when he’s eating a bone when you approach, perhaps when you approach you should toss them a piece of cheese before you turn and walk away. In the first example we are giving the dog an opportunity to wake up and come toward us instead of prodding it.  In the second example the dog will learn over the course of time that when someone approaches him while bone chewing that it will mean he’s about to get something even better.

If you are the owner of a growling dog it’s always best to seek professional help from a positive based trainer who can show you creative, fun ways to help the dog gain more confidence and coping strategies to overcome those situations where it feels threatened. By helping the dog to cope better and overcome his fears, you will help to create a strong bond of trust that can help prevent future issues, or present issues from escalating.

Karen Fazio is a professional dog trainer and owner of The Dog Super Nanny professionaldog training and pet sitting services. She has over a decade of experience working with fearful and aggressive dogs using positive-based training methods. She can be reachefor comment at thedogsupernanny.com, or by emailing her at karen@thedogsupernanny.com