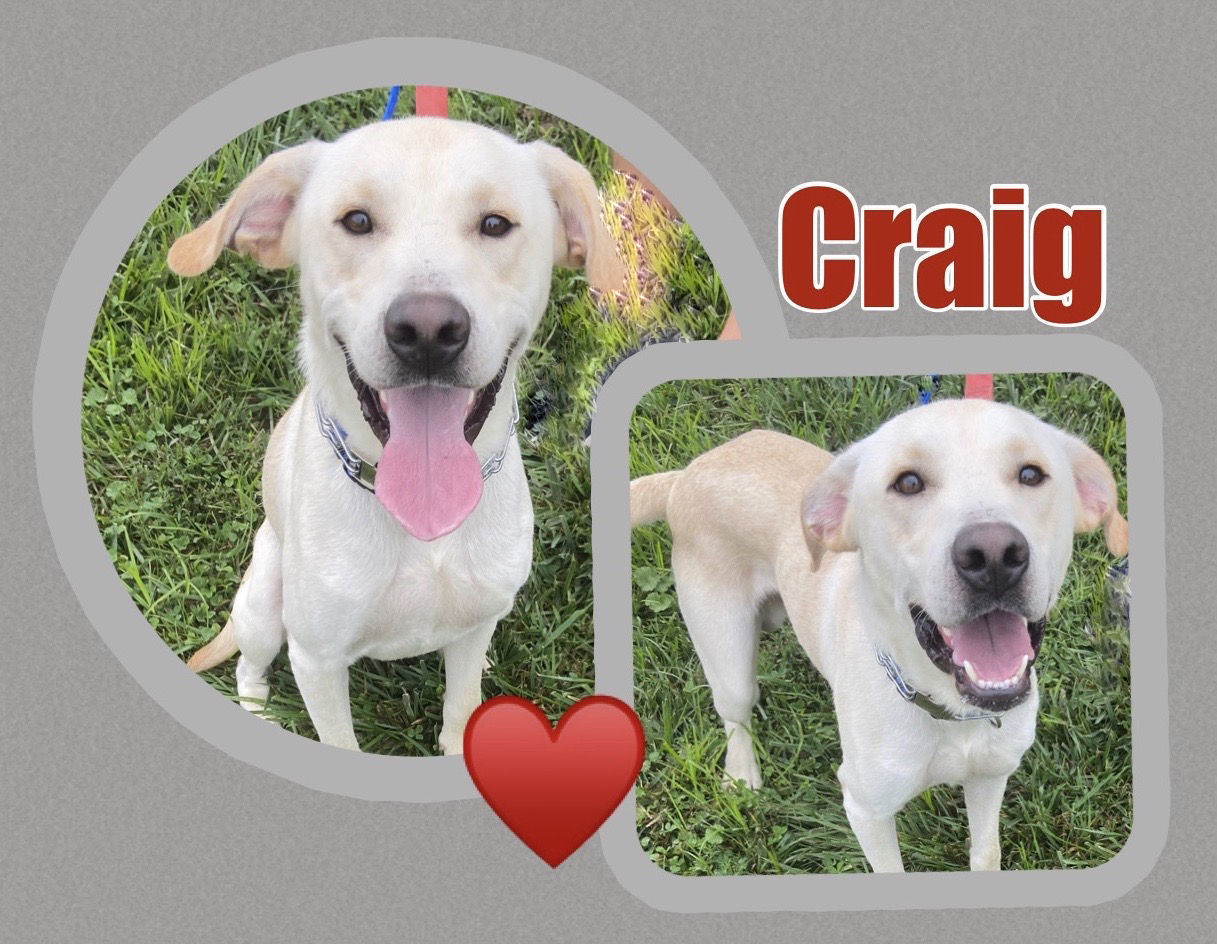 12/22/2020 FOSTER UPDATE: I am happy to report that Craig made a friend today! My sister-in-law agreed to introducing Craig to her dog, so we all went for a walk together. Craig whined a little bit at the beginning (5 minutes or so) and then was fine! We let them smell each other and Craig did amazing. He even laid down and showed Maverick his belly and gave him some kisses. He may not be a social butterfly, but is definitely friendly.

11/23/20 FOSTER UPDATE: Craig is doing great! He still has his moments (he’s still a baby!) but he’s an amazing dog. He now brings the frisbee back to me and is super close to learning to play fetch! He’s doing wonderfully inside the house – super cool and relaxed. He’s always ready to go outside, but now he waits patiently and spends more time on his bed. He’s learned “Shake” with both hands and is an expert with other basic commands (“Sit”, “Come”, “Stay”, and “Roll Over”). After months in foster with us, we feel so confident that Craig is ready for his forever home!

11/16/20 FOSTER UPDATE: Craig is doing amazing! He’s matured so much and now spends more time sleeping and laying down on his bed while we cook, eat, watch T.V., clean the house, etc. He’s more relaxed, and we’ve noticed an improvement in his ability to focus and listen.

Yesterday we went to the dog park for the first time. Though there were no dogs there, he enjoyed sniffing around and getting his paws full of mud!

We haven’t had the opportunity to introduce Craig to many other dogs, but I’m asking him to stay and try at least to observe dogs in the distance in a calm state of mind. He whines a little bit, but I’ve seen him give brief eye contact and act more curious about meeting other dogs than he did in the past. We’ve made so much progress!

10/14/20 FOSTER UPDATE: Craig is doing amazing! We’re now walking him three times a day instead of five, with two playtimes in the backyard. He’s responded well to the adjustment. He’s also learned door manners and is now an expert at being calm and relaxed when entering or leaving his crate. We’re SO proud of him for his progress in these two areas – it’s a HUGE change in behavior for him!

We’ve introduced Craig to two family members, and he did extremely well. He prefers to approach new people vs. being approached and is not comfortable with his head being petted right away. We feel it’s important to explain this to new people and ask that they start by petting his chest or back. While meeting people is still really exciting for Craig, he calms down MUCH easier now and isn’t growling at all!

We’ve seen so much progress with Craig that we hardly need his e-collar now! It’s clear that he’s working hard and really wants to learn what he’s being taught in training.

10/7/20 FOSTER UPDATE: Craig seems calmer and more relaxed. He’s doing an excellent job so far! He’s starting to allow us to pet him more and hardly ever jumps on us. He’s also less obsessed with shoes and he doesn’t chew his leash anymore! We’ve started reducing the amount of time he walks to see how he behaves in a more realistic scenario. He’s such a cutie!

Craig is going to spend some time with a trainer – we’ll send another update soon with feedback!

Hey everybody…I’m Craig!  I’m almost eleven months old now and weigh a little over 50 pounds. I’m still a puppy, so I have puppy energy and some basic doggo skills to learn. The good news is I have an awesome foster family who are showing me the ropes, and I’m starting to get the hang of things!

Craig’s journey to CLR began when he was dumped on someone’s farm. When attempts to locate the owner were unsuccessful, the family who found him reached out for help. Craig has spent some time with a trainer and is receptive to training – he just needs some leadership to help him be the best he can be!  We do feel that he would do best in a home with no other pets or small children.

While we wish Craig had gone to a responsible home initially, CLR is always on standby to help abandoned pups find the consistency and stability they need. We know Craig has an amazing life ahead!