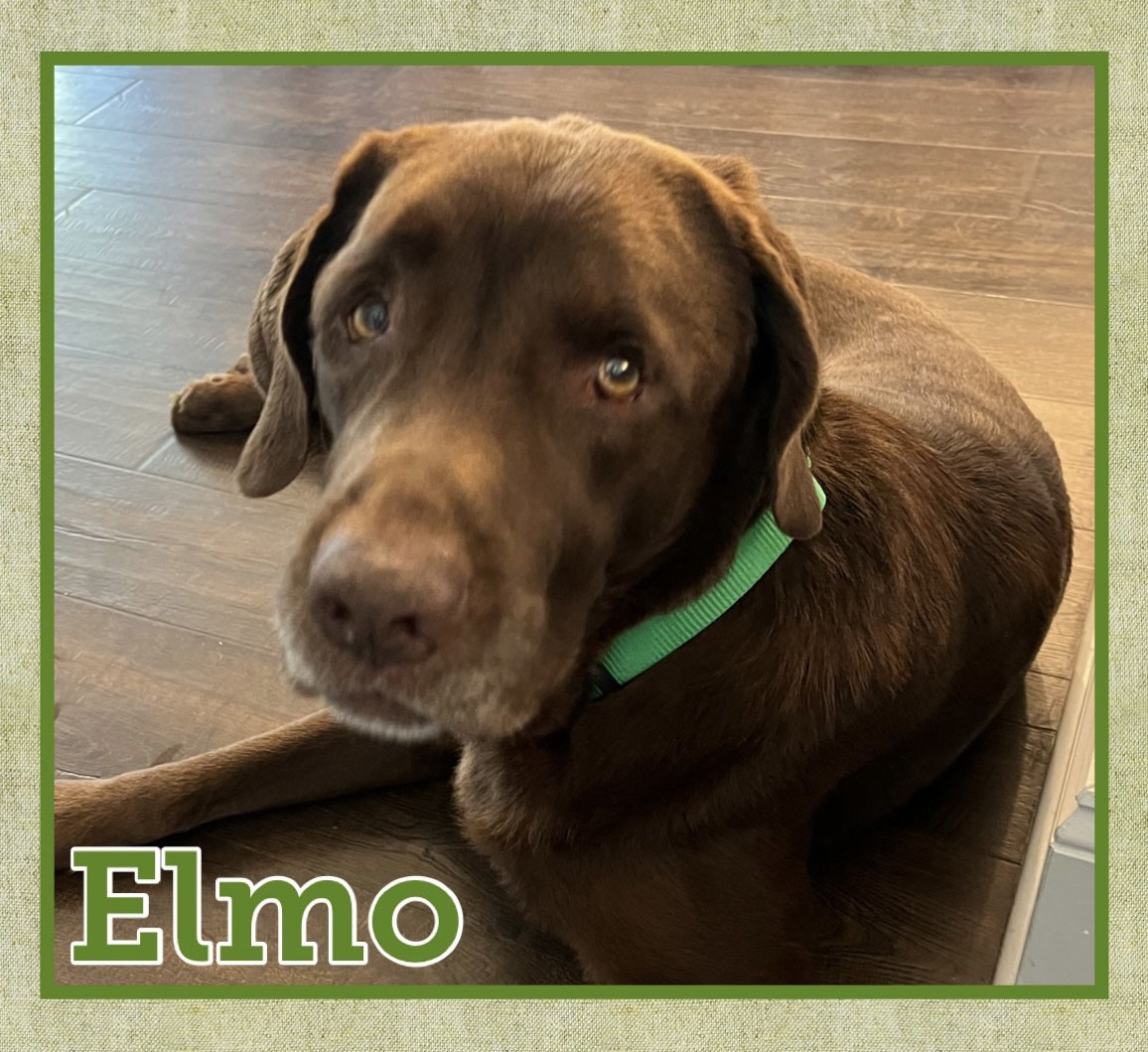 10/7/22: NEW UPDATE: Elmo has been in foster for about 5 days….it’s been so much fun watching him settle in and adjust to life indoors!  He has made HUGE strides in house training.  He has only had 1 accident in the last two days!  He went to the door this morning to let me know he needed outside.  Big boy is so smart!

I am working on some commands with him.  First priority was the word “no.”  He picked up on that quickly! 🙂  He has mastered “sit,” and we are now working on “stay” and “down.”  He has a little ways to go but he has been a quick learner.

He still hates the crate, but I have been giving him free reign of the house (with some limitations).  No major issues so far!  I left him for a few hours this week and he did great!  He was a little stressed about my departure but seemed to settle.  I am going to continue to test him these next few days.
Elmo went to visit a few new dog friends at the pool this week.  He did great!!  He was fast friends with two new dogs and jumped right in the pool.  I don’t think he has ever been swimming so he was a little hesitant after the first plunge, but I think he will be a water dog.  And he is definitely a social butterfly with new dog and human friends.
I’ll continue to update on his progress.  He is such a sweet boy and will be a great dog for any family.

10/4/22 UPDATE: Elmo has been in foster for a couple of days.  He is such a sweet and affectionate boy!  He has a great temperament and is fast friends with both dogs and humans. Since Elmo was found stray, we know very little about his backstory.  I would guess that he was an outdoor dog.  He spent the last few days adjusting to life inside.  He was very excited and curious about the newness of his environment when he first arrived, so I am working on the very basics with him.  We have started with housetraining and some basic commands.  He is a smart boy so I’m sure that he will pick up on it quickly.  He does walk well on a leash and rides well in the car.  I am also starting to introduce him to his crate.  He isn’t a fan right now but I’ll continue work with him.

Elmo loves bones and toys!  He is a very playful boy!  But his favorite thing is being with his human.  He won’t leave my side. He is a super cuddler, wanna be lap dog.  He also will give you a big nose nudge when he wants some extra attention. He is such a great dog and has so much potential!  I’m exited to be on this journey with him!

How about a fabulous 80 pound chunk of chocolate?  Elmo has quite the fan club and for good reason, he’s a GREAT dog.  He is a 6 year old who loves everyone.  He gets along beautiful with dogs and manages to win everyone’s heart who has had the opportunity to meet this very special boy.  He was excellent for his transporters and they couldn’t say enough about him.  He was found as a stray and needs a family to keep in safe and provide him lots of hugs and kisses to let him know he is the best.

Elmo is available again – apparently, after less than two days,  the adopters decided they prefer a less active dog rather than a dog who still has some energy and joyful atttitude about life.  We always want our dogs to be in the right home so we will patiently wait for the right family to welcome him into their home.