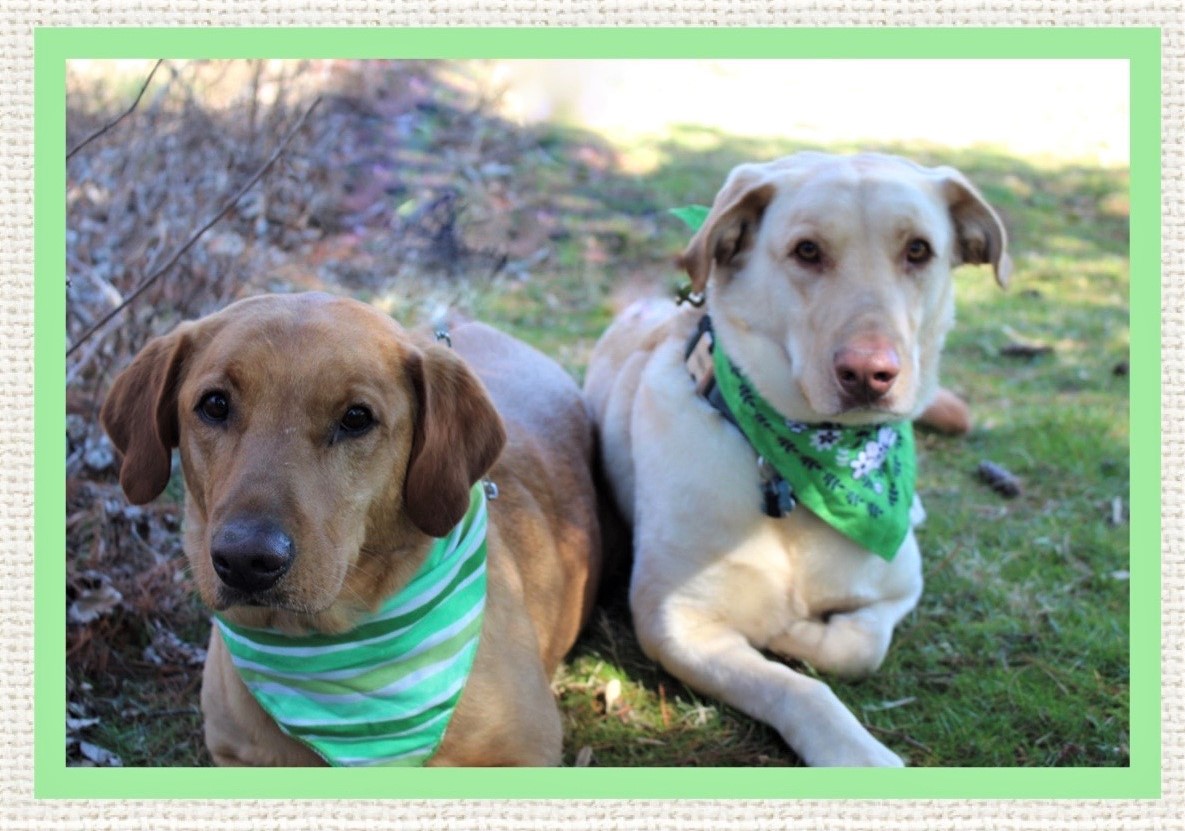 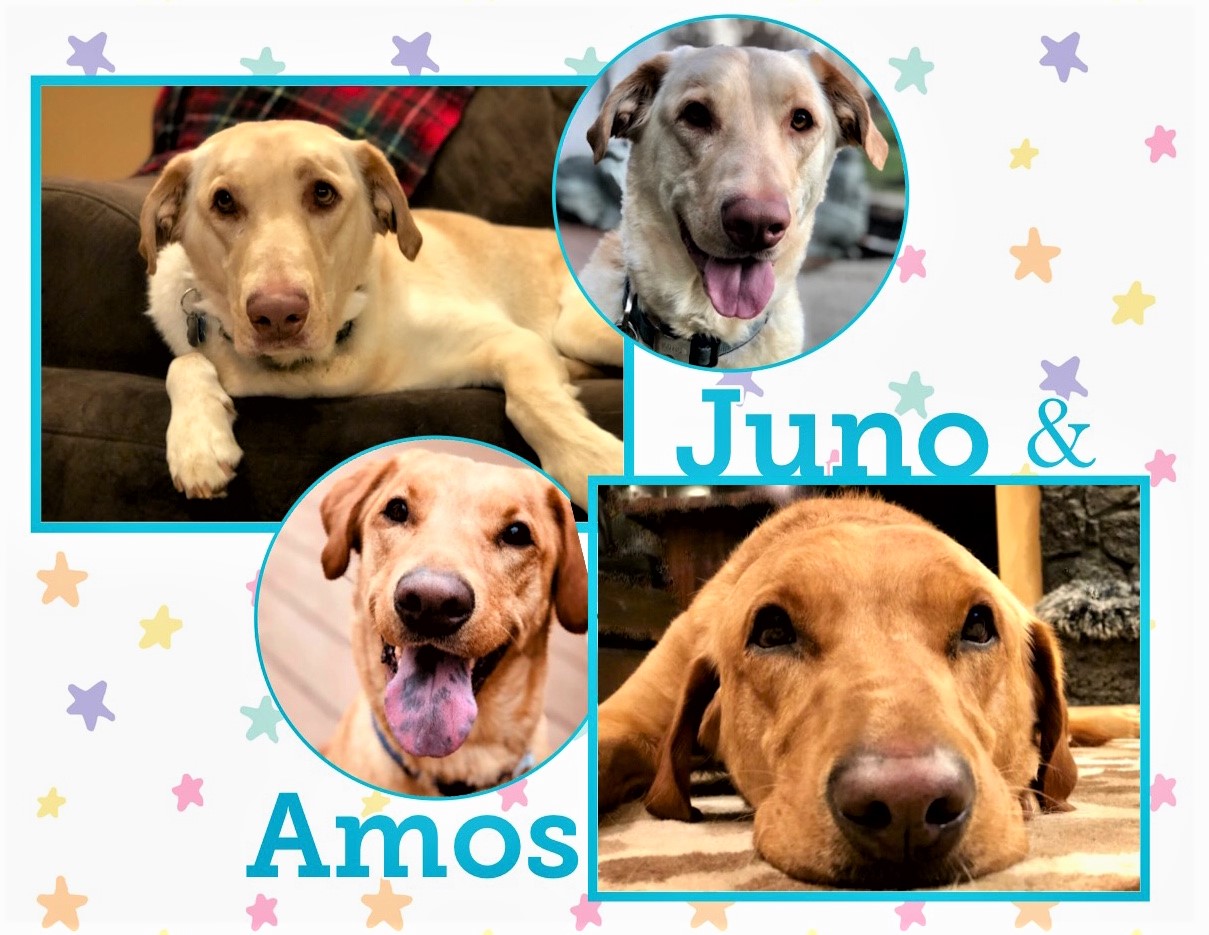 2/4/20 NEW UPDATE #3:  Amos and Juno are settling into the routine quite nicely around here. They sleep out of the crate. When we’re gone, we do not crate them either and the boys seem very happy sleeping on the couch.

We had a contractor come over to do some work last week and I crated both boys for about 2 hours. Amos didn’t mind, but Juno barked the entire time. I think he just wanted to help out. We have not had any more food stealing incidents from either dog. If I do leave food out for any time though I take them with me so they are not tempted. They have been great with my son. He was sick for a few days and Juno would not leave his side, sleeping on the ground next to his bed.

With the weather warming up our walks have gone longer. They like to walk out in front or to the right instead of a regular left side heel that we’re used to. The nice thing with them being food motivated is it makes training a bit easier. After watching the two of them together, I do think it would be a shame to break the two apart. They mirror each other on the couch most nights and if one moves, the other moves to be his twin. The two really do seem to complement one another. My husband and I tried a little experiment on our walk: He took Juno and I took Amos and neither one looked back or seemed to miss the other, which may be interpreted as a sense of trust.

1/21/20 #3: They have been off their meds now and perfectly normal, wonderful 4 year old pups. They both love their daily walks and do a good job on leash. When we pass other dogs they don’t pull or really care much. We have really been working on the counter surfing. They have both been known to take advantage of the situation if your back is turned from a delicious morsel.

Both boys are incredibly smart though and have so much potential. They have been playing well with our dogs and my 7 year old. Balls are a favorite along with tug-of-war toys. At night, Juno prefers cuddles in bed while Amos prefers the floor or under the bed. Both are house-broken and will whine enough to let you know they need to go outside. The barking while we’re gone has subsided as I think they realized now, we’re coming back. We do still crate them when we leave, but we do that with our own dogs too. Best of all, they both love to give hugs! If you kneel down they will wrap their neck and head around your shoulder and head. It’s adorable!

1/14/20 FOSTER UPDATE #2: Juno LOVES walks. They both do, but Juno sees that collar and starts wagging so hard he can’t sit down. He also dearly loved getting brushed too.

Who needs a Roomba, when you have Amos, the taco bandit? He has decided that counter surfing might not be the life for him after all and sticks to waiting for things to land on the floor. We have been testing both boys by putting teasers out on the counter and they still put their snoot up, but don’t snatch the food anymore. I still don’t trust them with a rack of ribs with my back turned!

While these two are food motivated, they are gentle when given treats. We have been feeding them together in their crate. Our 7-year-old eats at the table and they just hang out waiting patiently next to him just in case. While we eat dinner, they sit or lay patiently on the floor.

Last night we let them roam free in the house overnight and they were great. They moved a few times from spot to spot and eventually landing on the bed for cozers. They seem to be house trained. We have had no incidents of marking and they always let us know if they need to go outside by standing or doing a little prancy dance by the back door.

FOSTER UPDATE #1: Juno and Amos are doing great. We went on a walk yesterday, which they loved. Last night they snuggled in the crate with a little crying, but it stopped quickly. Juno was the whiney butt. Right now, they are zonked out on the rug and I don’t have the heart move them. We did have one sacrificial taco get snaked by Amos yesterday. I literally turned my head to get in the fridge and it was gone. We have adjusted our food placement since then and life has been good 🙂 Amos and I had words and exchanged the don’t snake my darn taco look.

We worked on the what commands do you know game today. They sit well, seem to know off, they are awesome at crate. They know lay down, but they don’t seem to like it. I took my dogs on their walk and I could hear them barking from the street. But, they are still adjusting to their foster home, so it’s hard to predict if this is a temporary behavior.

Juno & Amos are a bonded pair of 4-year-old siblings. They are both very affectionate, playful siblings who do well with other dogs and absolutely adore people.  They were originally surrendered because of personal circumstances and now they find themselves looking for a new family again.  They were adopted 1.5 years ago by a family with several children.  Now that the babies are toddlers they are concerned that the dogs take food from them while they are walking around holding a tempting morsel. They know many commands and have had professional training and, like all dogs, need structure and occasional reminders to mind their manners.  The original family said they are food motivated and will also get in the kitchen trash can.  Their foster family has done a fantastic job teaching them not to counter surf and finds they require minimal redirection.  So fast forward and they have asked to have them rehomed.

Juno and Amos are a very bonded pair, and we really would like to keep them together. It may take them a little longer for them to find their family, but our goal is to do what is best for them.