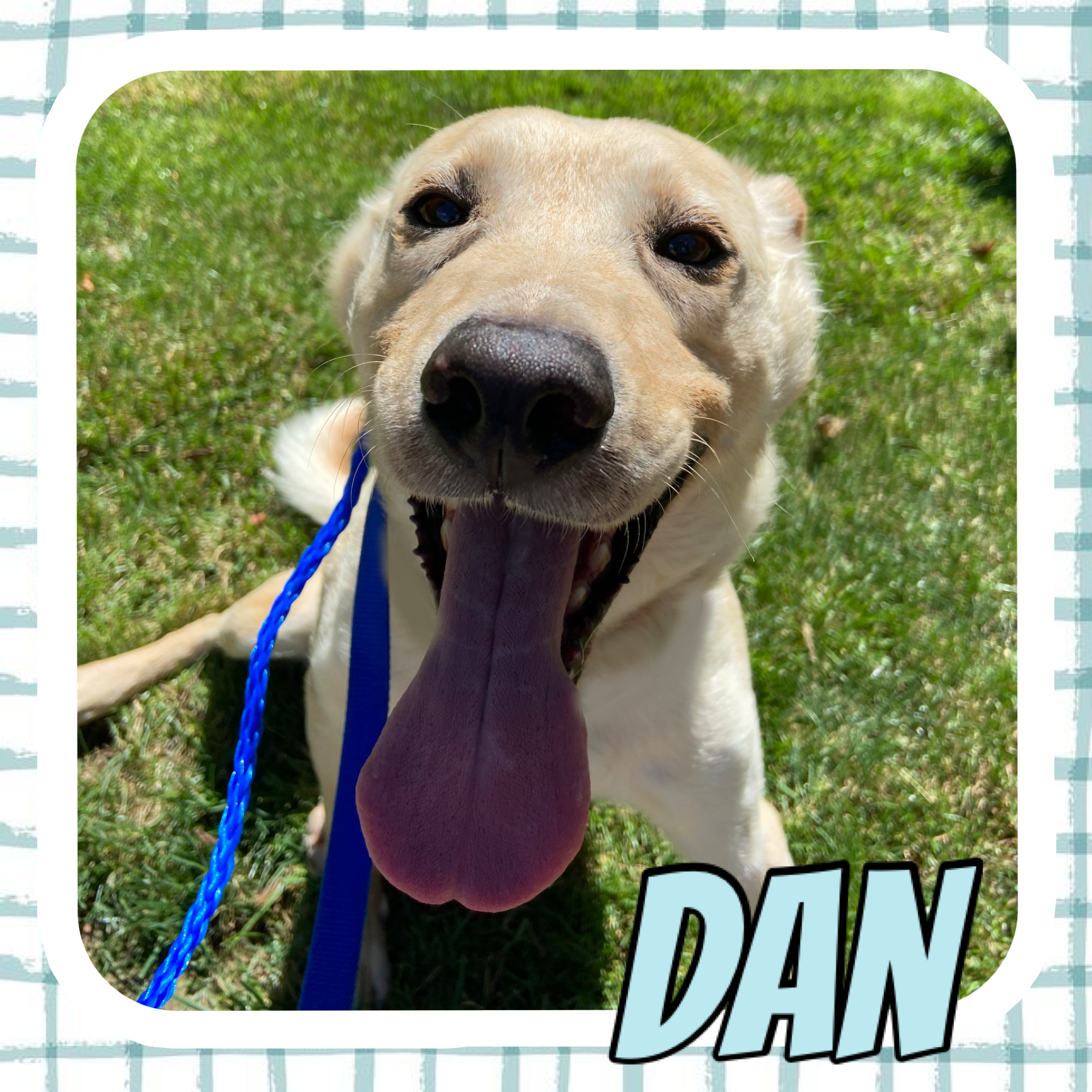 8/10/2021 FOSTER UPDATE: Dan is now in foster with Rilee, who was just adopted from CLR last week! Dan and Rilee are getting along well. Dan seems to have made some improvements since his last stay. For one, no accidents in the house! He has rarely tried to jump on the bed or furniture, and the times he did were when he was alone in the room. The larger crate seems better for him, though he still doesn’t love it. Making slow progress on some leash walking.

His favorite thing to do is still to request belly rubs. He’s so sweet and gentle. He just wants to be wherever you are and would make a good cuddle buddy!

7/8/2021 UPDATE: Dan is adjusting well! His temperament is very calm and sweet. He loves a good belly rub. He has conquered his phobia of stairs! He seems housetrained, and has only had one pee accident when I was at work…no biggie! I’ve tried to teach him a few commands, but he’s not super interested in learning just yet. I’m sure he’ll make progress as he adjusts further – we’ll keep working on it!

Dan doesn’t like his crate, which is very understandable given his history. He’s broken out of his crate a few times since he first arrived. Over the past two days, I’ve only put him in the crate at night to sleep; he has made progress with baby steps! Last night was the first night he didn’t fight me to go in, though I have to sit on the couch and read for awhile before I leave the room. Dan is such a good boy and will make some lucky family very happy!

Hi friends…I’m Dan! I’m 1.5 years old and weigh 42lbs. I love belly scratches and ear rubs, but who doesn’t? I’m so happy to be at Cincinnati Lab Rescue. I think my smile says it all!

Dan was owner surrendered to Best Friends Animal Sanctuary in Jamestown, TN. He spent his entire life chained to a tree in a dirt yard, going to sleep at night in a metal box. The folks at BFAS convinced his owner to surrender him, and someone within our rescue network connected us with BFAS for rescue.

Dan is a complete sweetheart! He loves to just melt right into his humans. That being said, Dan is still learning how to interact with small children and will need to be placed in a home without kids. Dan is also learning leash manners, but is on the smaller side and corrects easily! Our volunteers had a chance to get him out for a walk with some of his rescue peers, and the introduction went extremely well. He loved meeting new friends! Dan rode well in the car during transport to Cincinnati, too. You would never know this boy had such a rough start considering how happy he is!