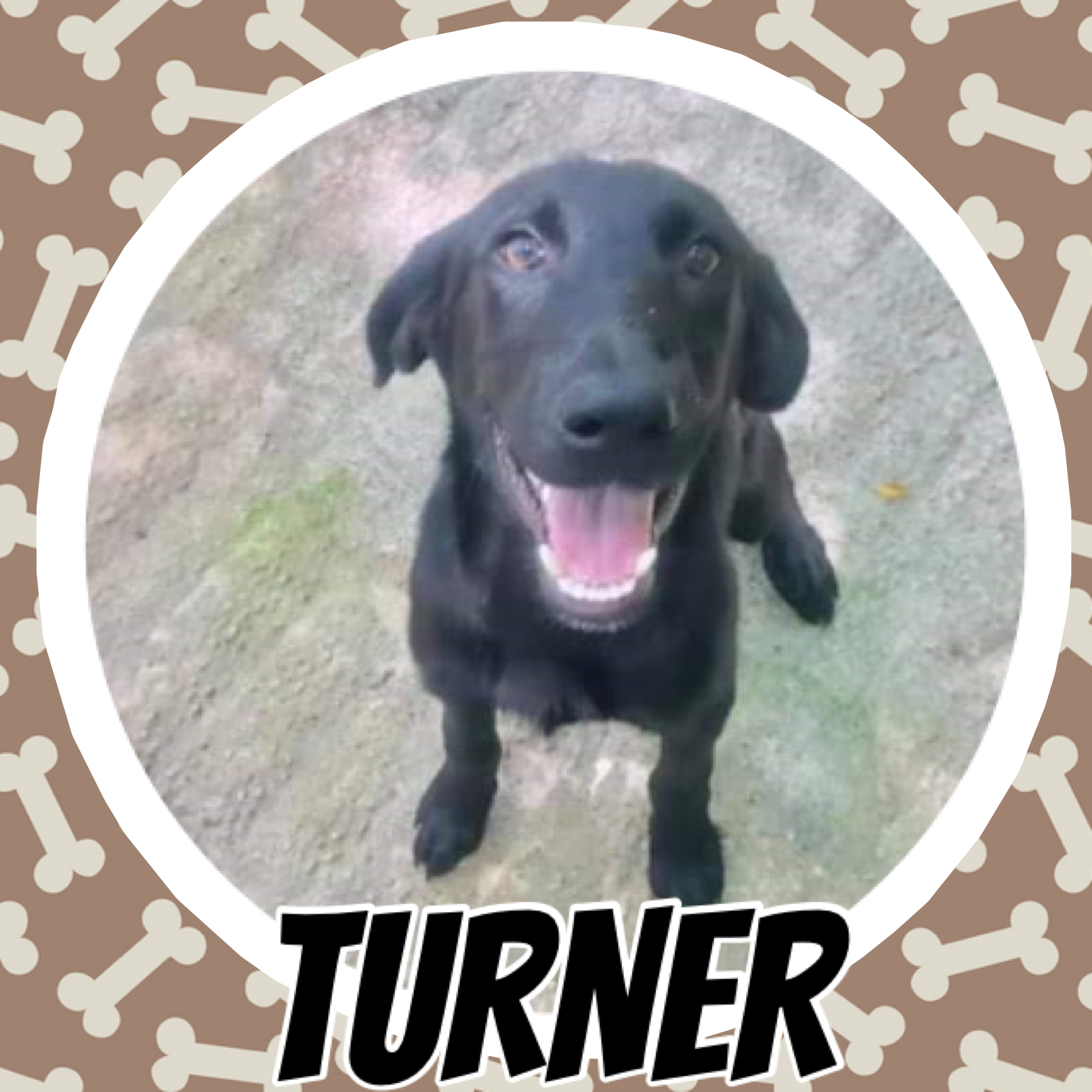 8/10/2021 FOSTER UPDATE: We’ve had Turner for about a day now. He settled in very quickly! He’s a very affectionate dog who loves people. Although he’s still a puppy, he is surprisingly calm. He tends to just follow people around and find a place to lie down nearby. He immediately commandeered our dog Kelcie’s bed, which is now his favorite place to settle in. He has yet to even try to get on the people furniture!

Turner is learning to play fetch, but still needs some work on bringing the toy back. He seems to be housebroken. No accidents in the house, and he typically goes immediately when we take him outside. He is doing well with our dog, even though she is not quite sure what to make of him yet. He was initially terrified of stairs, but learned very quickly how they work. Then he took a small spill going up and he’s hesitant to try that again (though bribes work), but has no fear about going down. He’s doing well in the crate, though he does need some bribery to go in. Once he’s settled in, he doesn’t make a peep until we let him out again.

Turner likes to watch TV (seriously!). He’s nervous about new things (a bicycle really spooked him initially) but seems to get comfortable with whatever the new thing is pretty quickly. He’s only barked a few times — once at an ad for a scary show on TV, once at another dog (he gets along with most dogs, and this one tends to make other dogs bark), and once at a cat, which he wanted to chase (probably not good in a home with cats). There was mention in a previous update of his having been abused, but we’re not seeing any behaviors related to that (like flinching when your hand goes near his head — he doesn’t do that at all). Overall, he’s just an easy, laid back, happy dog!

8/01/2021 UPDATE:  Precious Turner  is as sweet as can be.  We always think a good temperament is the greatest attribute!   Turner was easy to have on the leash.  We walked up the alley and around the parking lot.  I then took him to the fenced in play area.  I took off his leash and let him have some time to run around.  He loved every minute of it!  He was responsive when I called him to me.  A former adopter, Jeff stopped by with his dog Bodie and we talked while Turner went to the fence and was not reactive to Jeff or his dog.  Britney brought Yummy out to the play area after I put Turner’s leash back on so introductions could be made.  Things went great!  Turner also met Bodie inside the play area leashed up and with the same positive results as with Yummy.

Turner made no attempt to lick the stitches and so I was able to keep his cone off the entire time I had him on the leash.  Turner has a GREAT temperament, decent on a leash, gets along with other dogs. We think he’s a total winner and ready for his forever home.

Hello there future family…my name’s Turner! I’m only 10 months old and weigh 51lbs. I think my name is pretty fitting – not to brag, but I sure do turn a lot of heads with this cute smile!

Turner was dumped and found stray in Mississippi. We think he’s a hound mix; his coat is a little thicker than a Labs, and you can hear some hound in his bark! Turner was in foster prior to being transported to Cincinnati, and his foster had lots of positive feedback! Despite being a puppy, Turner was all over his fosters yard, patio, and front porch and didn’t get into or chew anything he wasn’t supposed to. He’s a very submissive boy and got along well with his foster siblings (including a really grouchy male!). He didn’t mind being surrounded by dogs that were bigger than him. Our CLR volunteers also had a chance to introduce him to some of his rescue peers and a group of small children during a walk. All introductions went fantastic!

We can tell Turner has known hunger as he gobbles his food up as soon as its in front of him. He’s doubled in weight since he was first found, but he’s still very skinny and will need to keep gaining weight. Turner is still working on his leash skills, but he’s food motivated and we’re certain he’ll learn quickly!