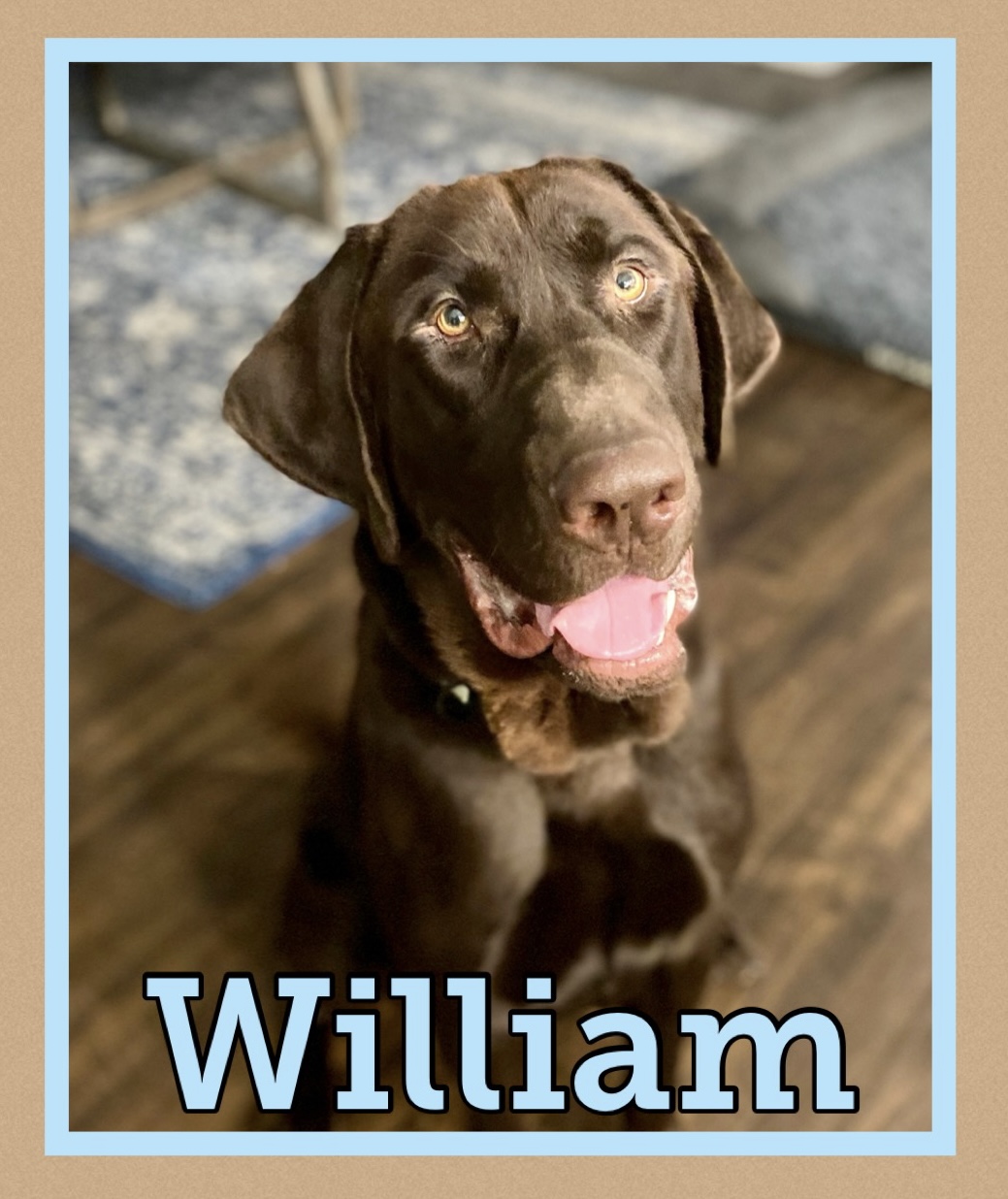 5/14/22 FOSTER DETAILED UPDATE: Personality –  William is a giant goofball!  He is the definition of a lab.  He is so affectionate and playful, and he has no idea how big he is!  He is a snuggle monster!  He loves to play with toys and bones and will scatter them throughout the house….multiple times a day.  He shares them nicely with my dog.  He LOVES humans and other dogs!  He met a few neighbors (adults and kids) and he did great.  He has also been in doggie daycare — he is a big friendly guy!

Commands / Training  – He knows how to sit, and we are working on “stay.”  I have also been working on “heal” during our walks.  He has made a lot of progress!  I use “off” for any undesirable behavior, and he is really starting to respond well. As for training needs, he can get a little mouthy when he gets excited, so I have been trying to improve that.  He can also be a little smothering at times (he wants to sit on top of you), so I have been working on setting boundaries.  It is clear that he didn’t have a lot of structure in his last home, but he has been such a quick learner!  He is a smart guy!

Housetraining – He has never had an accident in the house!  He seems to be completely housetrained.  He also only crews on his toys and bones and has not chewed on anything off-limits.  I have left him alone (free reign) for a few hours a couple times this week.  He barks a little bit when I leave, but he seems to settle well.  I have never come home to any issues, so he seems to be comfortable uncrated.

Crate – I tried to use a crate with him and he wanted none of it.  He just wants to be with his pack 🙂

Walks – He has made SO much progress with his leash manners.  He is a big boy so I have been using an ecollar for most of our walks.  He is learning not to pull but sometimes needs to be redirected when he gets excited.  He loves our walks 🙂

Eating Habits – he LOVES to eat and will crush his food in about 10 seconds.  I have been using a slow feed bowl to help prevent him inhaling his food.

Car Rides – he gets a little excited but he does pretty well in the car.  He loves to hang his entire head out of the window.

5/9/22 FOSTER UPDATE: Sir William (aka Willie Wiggles) is a GREAT dog!  He is the definition of a big goofy lab! He had a great first day.  He found the toy bin within the first 2 minutes of being in the house.  He loves to play with them!  He has stuck to his toys and bones and hasn’t shown any signs of being an aggressive chewer.  What a good boy!  He also discovered the kiddie pool – he is a big water dog!  He loves to splash and play.

Will is a total sweetheart!  He is so affectionate!  He is great with both humans and dogs.  He loves to cuddle up and burrow into you.  He thinks that he is a lap dog and has no idea how big he is.  If you ignore him, he will give you a big sloppy kiss to get your attention.  As for training, he also appears to be housetrained – no accidents!  He also knows a few basic commands.  We are working on his leash walking, and he has made great progress!  He pulls a little at first but can be redirected.  He is a smart guy and learning quickly. More updates as this big guy gets settled in! 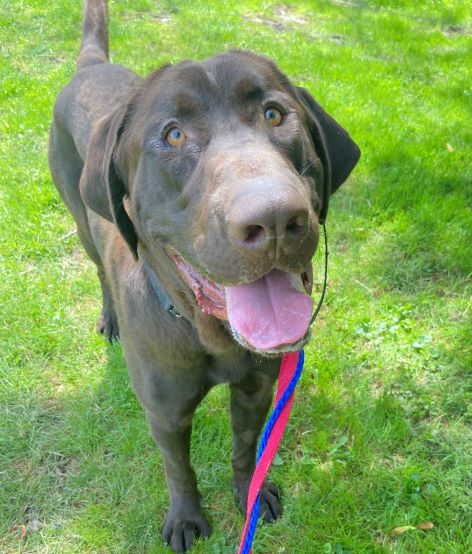 Fortunately, someone involved with rescue noticed a Facebook post for William.  Even though a person may claim, “free to a good home”, that is never a safe route for rehoming a dog.  This is a reminder to all that FB, Instagram, Twitter, etc. are never the best choice and precisely why rescues exist.  William is only 1.5 and a large boy at over 90 pounds.  He does fine with other dogs and even ignores cats. Even better, he lived with three kids, so we know he’ll do great with older children too. Because of his goofiness, he just isn’t aware of his size and unintentionally will overwhelm small children.  His owner could no longer provide sufficient care, and once he was contacted, he was thankfully willing to surrender him to rescue.  We’re hopeful this handsome dog will not need to wait much longer to find his new home.