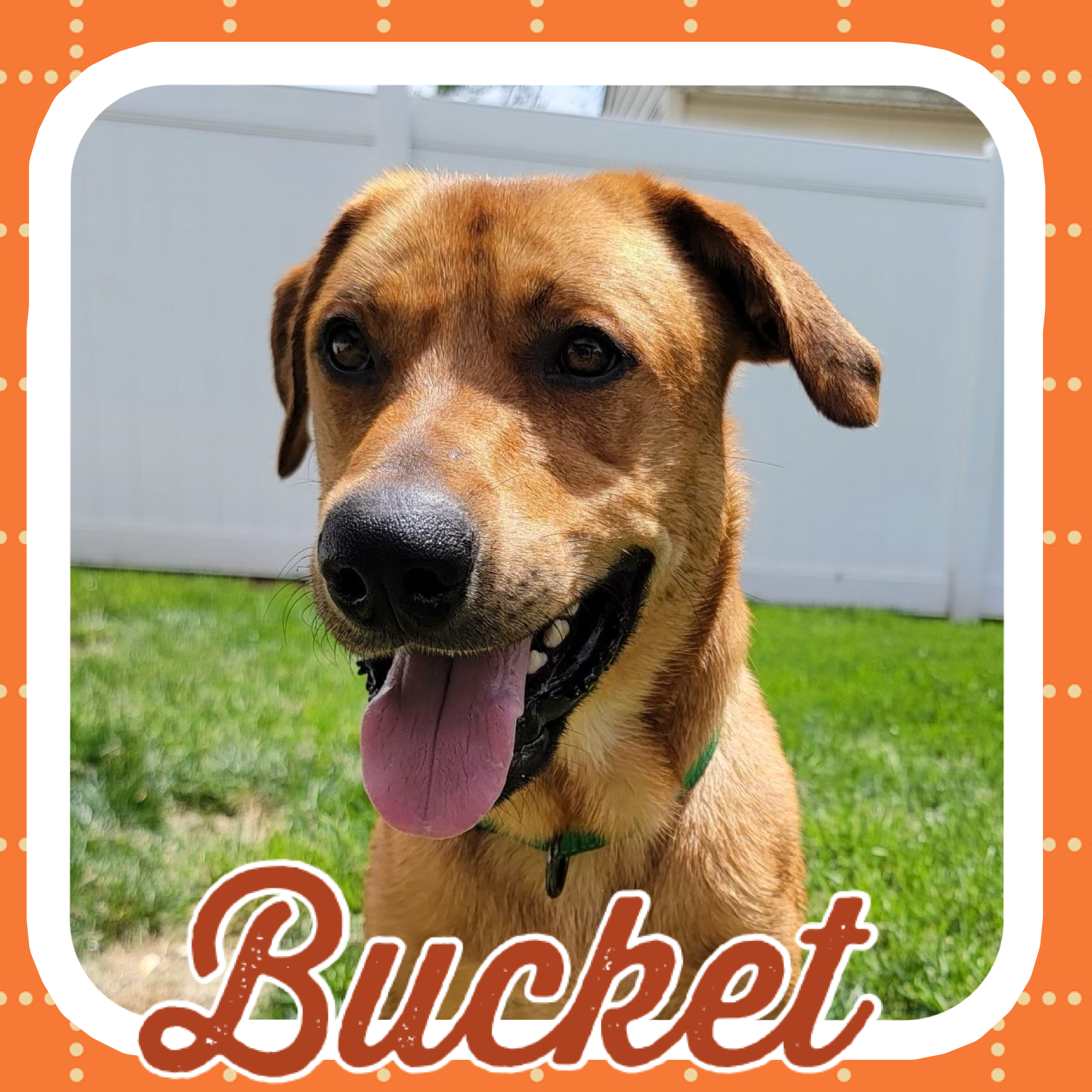 5/2/2021 FOSTER UPDATE: Gosh, Bucket is SO sweet! He honestly wants to be on my lap ALL the times…that’s when he’s the happiest! We’re working on getting pets when he has four paws on the floor, but he’s so sweet it’s hard not to let him snuggle.  He is making progress in understanding boundaries.

As for training, he has not had an accident the past few days.  He’s settling into the routine here and is adjusting well. He’s really good in his crate.  And he’s sooooo food motivated. So he’s getting better at going into his crate with treats!
We discovered how much Bucket loves the water and got a little playtime with the sprinkler today.  We are still having to limit activity due to his heartworm treatment but he is recovering well. This boy would be a great addition to any family.  He does great with both dogs and kids!

4/24/21 FOSTER UPDATE: Bucket is a total love bug!  Although he has had a rough start to life, he is very affectionate and just wants to be with you!  He loves to snuggle and is a big cuddler!  He does great with both dogs and children.  He has been lower energy because of his heart worm treatment.  He is recovering well!

Bucket does well in his crate and will go in willingly (when there are treats involved)!  He has also done well with housetraining.  He has only had 1 accident – which can be expected as he starts to understand the routine.
Bucket has a ton of love to give and would be a great addition to any family!

Hey there…I’m Bucket! Yep – you read that right. My name is really Bucket. Does it help if it has a cute story behind it? People call me Bucket because I’m a big ‘ol bucket of love, and it’s true! I love people soooo much!

Bucket is a two year old, 62lb Lab mix who came to CLR as a stray from Tennessee. He is wonderful with other dogs and people. He is SO sweet! When he first met one of our volunteers he grabbed her hand through his crate with his paw and wouldn’t let go. We’ve been told that Bucket loves to fetch and chase frisbees. He also adores chasing water from the garden hose.

Bucket is well behaved for a stray! He is definitely food motivated (which will make training easy!) and is already catching on to basic commands. He has a tendency to jump up and give hugs, but responds to corrections well. We love Bucket so much and know he’s going to shower his future family with so much affection!

Medical Note: Bucket is heartworm positive and will begin treatment on 4/20. Unfortunately, CLR treats a staggering number of dogs for heartworm each year, which is why we require all dogs be kept up-to-date on year-round heartworm prevention. Bucket can still go home with you and your family, but will need to continue to be seen for treatment and lay low while he’s on the mend.