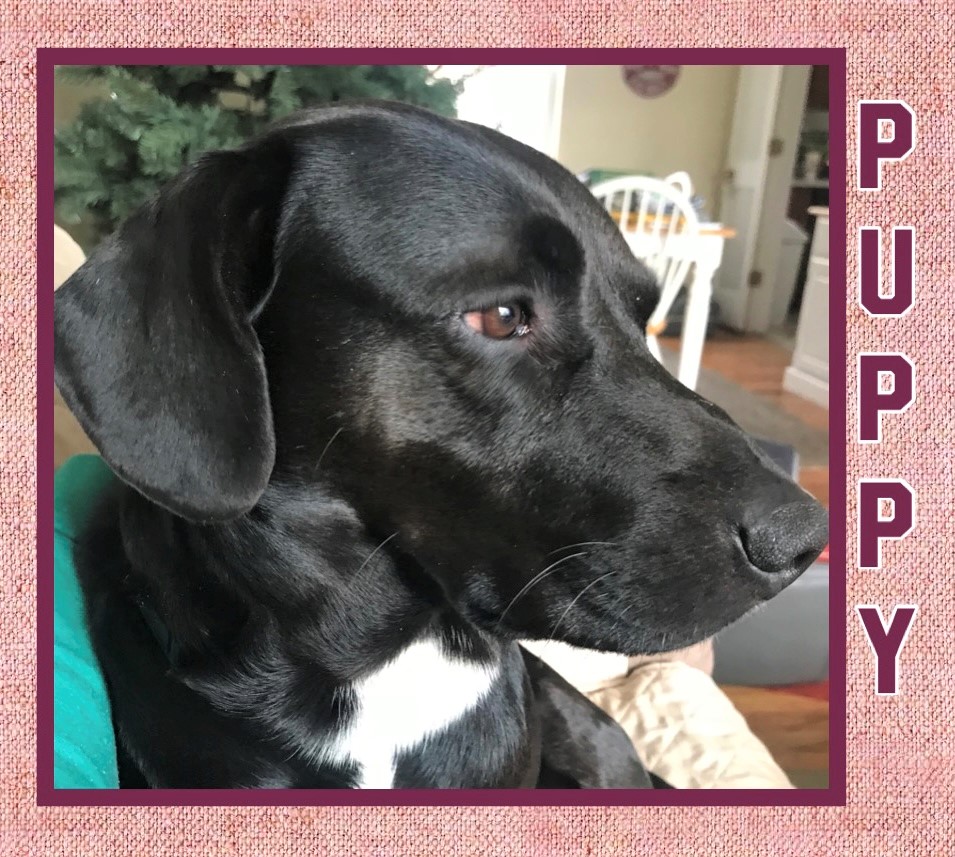 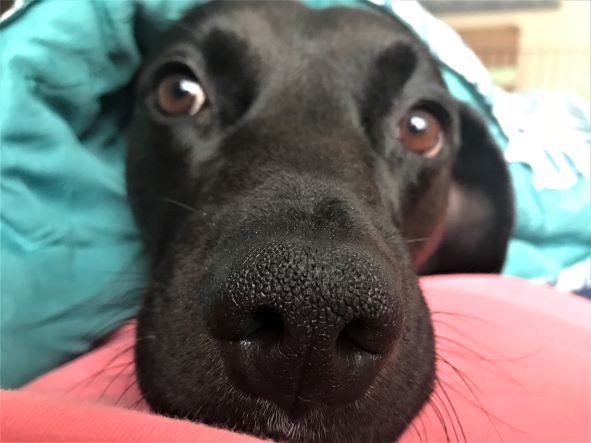 1/28/22- FOSTER ULPDATE:  Initially, I thought Puppy would need a lot of effort and work, and I now take it all back. He is highly trainable; we are on day 2 without Puppy reacting poorly to people. He still needs continued socialization, but so far, we adjusted to people, walking dogs, and some loud sounds near heavy machinery. Still nervous when hearing barking dogs and loud pop-like sounds, and if someone makes sudden movements. I am confident that after a period of time, he will learn to stop reacting to these. He has met several people yesterday and today, and he was very friendly with everyone. He does not seek meetings with dogs – he is curious, but sometimes he would rather avoid the encounter.
Puppy can be sometimes timid, so we are focusing on his confidence and sense of security. For now, I am not using a prong and am only teaching him to not pull hard and to return to me if I stop. He is learning to focus outside and not be afraid. When he is more comfortable, we will start on other training. Puppy learned to sit next to you calmly to get attention. He is not a jumper, but if you are overly excited around him and jump up, he can try to jump on you in return.
He continues to be a voracious eater, but he is not at all food aggressive. He begs and searches for food non-stop, but he has learned that human meal time is not for him, and he quietly lays down and waits, hoping for scraps until people are done. He doesn’t get any, but he does get a little dog treat for being calm. Soaking his dry food in water helped slow down his eating. He has also learned to be a polite treat taker and is very gentle. We consider him housetrained, he has not had any accidents and he did show us a few times he needed out by going to the door. We do take him out frequently (every couple of hours) but he sleeps through the night just fine.
His favorite thing is people. He shows equal excitement going for a walk and taking a nap with his person. He does want a lot of affection and needs to be taught to ask for it, and not just invite himself over for a scratch party. I’m not going to lie, we enjoy giving the scratches and having a warm dog under the blanket during this cold weather.
He sleeps in his crate during the night, in the same room with us. For now, we are not moving the crate to build his confidence that he’s ok and no one is leaving him. He goes in and out of the crate regularly as we put treats in it, and is not afraid to be there – he should be fine with further crate training. When I run errands, he is left out of the crate (after everything is checked to ensure no food is readily available and he will not get himself in trouble.) Surprisingly, he shows no signs of separation anxiety, he lets us leave and just goes and sleeps on the couch. We usually ignore him once we get back, and invite him over once he is fully calm and shows no signs of excitement that we’ve returned.
He does strive to be next to his people, but once he knows that you will be engaged in an activity that does not involve him, he will prioritize his comfort and will find a nice warm spot with the best blanket, not necessarily next to you.
He enjoys walks, car rides, and cuddle time. We think he is still adjusting and isn’t fully relaxed, but he started to be slightly interested in toys. We think he will open up more in the coming weeks, and we can see a more silly, playful side of him. Puppy fits seamlessly into our day-to-day life. He is a good-natured dog, who enjoys human company and is overall the best boy, despite his rough past.

1/24/22– We just learned that at one point, Puppy was on the street just trying to survive. What’s even more shocking to discover was that the neighbor kids would abuse and taunt him for their entertainment.  Although he is a little cautious, he remains a very sweet and loving dog. Fortunately, he is with a fantastic foster who is dedicated to helping him trust and know there will be a future where he is safe and loved.

Yes, Puppy is really the name of this sweet two-to-three-year-old.  He’s a new arrival who immediately captured a few hearts upon his arrival.  He was found abandoned in a trailer with several other dogs and when we learned he was left without food or water, we knew we had to step in to help.  He gravitates to people and having lived with so many other dogs, we know he’ll do well with other dogs too. From what we have learned, he could easily have a halo over his head because he is an absolute angel.  He has the sweetest face and the most tender eyes If that’s a window to his soul, then we know that would be a very accurate description.  We did not receive much additional information about his past, which isn’t as important since we prefer to focus on his future.  We look forward to helping find him a warm and cozy home where he can cuddle up with his new family.