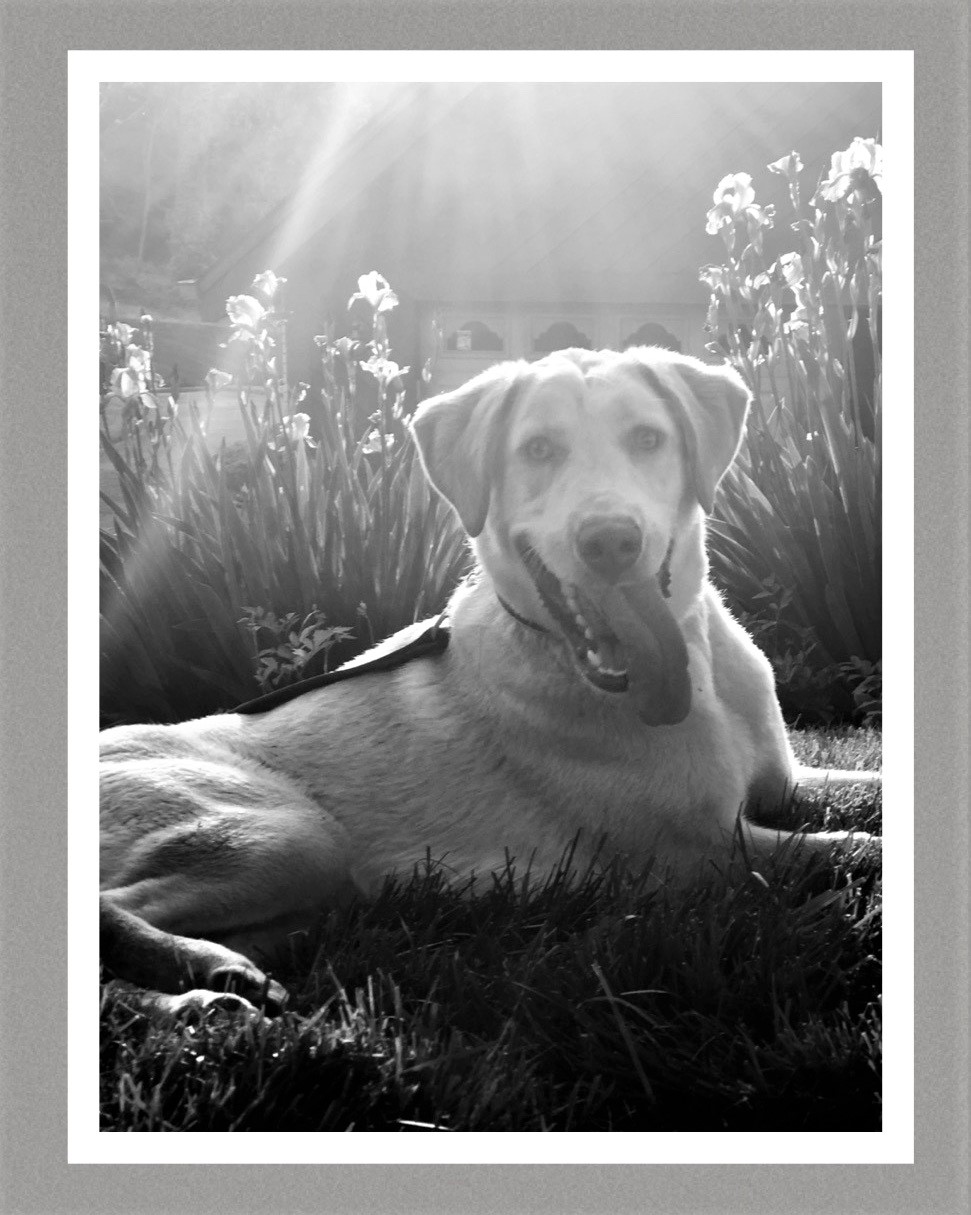 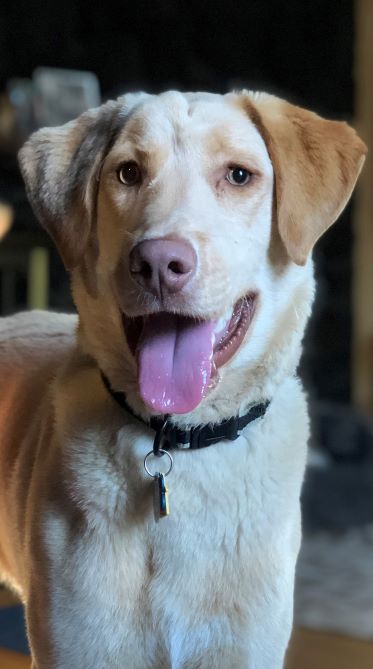 6/12/20 UPDATE 3:  River has learned how to go up a flight of stairs all by himself. We are working hard on getting down easy. He knows he can’t get down and stays at the top until we come to get him. Today we had our first successful trip down the stairs while I held his collar and he leaned against the wall if he got wobbly. He is really inspiring to see work through his balance issues. He has such determination in his heart and if he wants to do something, he will do it!

His excitement over food is lessening as we are feeding him more frequently and smaller amounts. He still gets his 3 cups of chow a day, it’s just spread out a bit. On a fun note, Reece taught River how to play tug of war! River dearly loves toys! He plays ball and likes to bring it back.

We are trying to teach River how to be a cuddlier. He really enjoys being with the family but doesn’t seem interested in snuggle time. Once he is with us on the couch and realizes he gets belly rubs, he’s down with it. It just seems that the idea of being cuddly does not come to him naturally or we suspect it is foreign to him.

Walks are going well but do need to be short. He does not like cars (day or night.) It really seems to be the noise that disturbs him. The louder the car, the more shaken he becomes. Again, something we are working on and can get through together. The predizone created a few potty accidents but he’s back to ringing his bell to go out and takes care of business.

We are thrilled with how well he has adapted and the enormous strides we are all making to help River adjust to family life.

6/2/20 FOSTER UPDATE 2: He still just is a heart thief. He is loyal to the bone for sure. I feel so bad sometimes because he will get up and just follow me anywhere even if it’s to the garage or bedroom or whatever room. On our wood floors, he does slide around but has really adjusted well. He kind of hops from rug to a yoga mat. We have 2 steps to our living room and he just leaps down them like a cat now! He adapts very well. He will come up and just lean on our leg sometimes. Of course, you just give him “scritches” and he’s your bud.He has learned to ring the bell to go outside. Very faithful about that. We have steps out to the back yard so I have been taking him out front where it’s flat.  Kurt is working on lay down with him. That seems to be easier for him than sit. When he sits, he tips over backward. We have been taking night walks since the pavement is cooler. River will stop dead in his tracks as cars with their lights come towards him. So…We are going to continue to take our night walks with more treats! He seems more in a trance with the light coming at him than anything. River loves to play with Reece, but not quite sure how to play. Reece is doing a very fatherly job of teaching him. I am actually impressed with my own dog! 🙂 He has been very patient with his puppy biting and just putting a paw on him to get him to chill. It really does seem like Reece knows he needs to be patient. He wants him to play tug of war so badly. River keeps biting his scruff though instead of the bone. That doesn’t stop Reece!

River dearly LOVES food. I don’t know what River’s past has been, but guessing, it’s not super. He sees me getting the food together and flips out. It’s much better now that we have gotten him to go to the crate. The crate has been an amazing tool for him. He sleeps and eats in there and it’s his “calm(er)” space. I fed him a piece of chicken tonight, which he ate, but then I offered another and he passed out like a fainting goat! He does the fainting goat thing often if he gets excited or overstimulated. He dearly loves to just lay in the grass. We have 5 baby bunnies in our front yard and he just watches them peacefully like they are best buds.

5/27-30 FOSTER UPDATE: River’s heart is so full it just spills over and makes me smile. 🙂
He has not had any accidents inside and will ring the bell to go outside while he sits there and gives you the “hurry up lady!” look.
Walking with him on a leash provides an interesting time. For just a pup, he really is well behaved on a leash though. He pulls sometimes, but only because his balance makes him drift. We usually stop about every 1/4 mile or so and rest and sometimes even flop down in the grass if it’s warm out. We have been walking a mile and a half, but it does take a good 45 minutes. River dearly loves being outside where he can feel the earth between his paws and get a good grip on his balance.
Ripley-River really enjoys his toys and they provide a great outlet for some chewing energy. He has not been drawn to anything else to chew on except toys. He and Reece (our 3-year-old Lab) have been having a fun time romping around too. It really is amazing to watch the two of them. They will get going and you can see River start to lose his balance. Reece will stand right next to him to hold him up as long as he can and then it’s game on again.
We are working on our food manners. While he does not beg at the table in any way, shape, or form, when his chow comes out he can make it literally rain dog food if his head hits the bowl right. Fortunately, he cleans up after himself really well. This may not be an accidental incident at all and instead just part of his elaborate Lab chow-chow dance! So now we are working on sit, which usually slides into a lie-down. That seems to be a more natural position for him. We have been crating him at night just for his own safety. He is very happy in there and sleeps through the night.
This guy could really use a house where it’s ok to fall over and not conk his head on a hard floor. We have hard floors and he does have a difficult time with balance. Getting up for him is a challenge until he can find some help or a rug. We have gotten all of our rugs and yoga mats out for him though. As far as steps go, he goes up a few steps and down a few steps, but beyond that would probably not be safe for him. If we come across more steps, I just carry him down. He just needs a big-hearted family and a soft place to land.

Our precious 50-pound Ripley is 11 months to a year of age.  He was surrendered because of his unique needs and as everyone knows, that never creates a barrier for CLR.  We knew his balance was compromised so we had him evaluated by the neurologists at MedVet.  Even with unstable balance (mostly with increased activity), he is a beautiful, loving, and playful puppy.  The neurologist feels this is not progressive and he can live a normal life.  Ripley has a wonderful temperament, is fine with children, and other dogs. The only extra requirement in his new home is to make sure he is safe and perhaps an extra dose of affection and love.

Not to confuse anyone, but we still use his original name, River since he recognizes it.